A long but successful process

After the Sámi communities had written to the Government, the County Administrative Board of Norrbotten was given the task to support a dialogue with the Sámi communities and the municipalities. However, the discussions broke down and for a few years practically all work came to a standstill. The Sámi communities founded the economic association Mijá Ednam, the name they themselves use for the area that comprised Laponia.

The breakthrough came in 2005 when Per-Ola Eriksson, who at the time was Governor of Norrbotten, took the initiative to resume the work with Laponia. The parties agreed on some crucial issues; among others that Laponia was to be directed by a local organisation with a Sámi majority on the committee. It was also determined that the Laponia Process would be based on a set of common basic values, and that all decisions would be made by consensus.

New regulations for the national parks and nature reserves were also requested, since these had been basically unchanged for a long time.

Something that the Laponia Process would call Searvelatnja – a learning arena – was also established during this stage . The aim was to learn from each other and to listen to each other’s opinions.

On June 30th 2006 all the parties signed a common agreement which they sent to the Government. It contained:

In December of the same year, the Government decided to give the County Administrative Board the task to develop this management in cooperation with the Sámi communities, the municipalities and the Swedish Environmental Protection Agency. Nine million SEK were allocated, spread over three years, for the work with the Laponia Process.

During 2007 the work really gained momentum. In essence the Laponia delegation has worked to develop a new management plan, new maintenance plans for national parks and nature reserves, and also proposals for a new management organisation.

While this work was being done, a separate work group was focusing on the development of infrastructure for the tourism industry and information about the World Heritage, including a Visitor Centre at Viedásnjárgga near Stuor Muorkke (Stora Sjöfallet).

The Ordinance on Laponia was decided upon in June 2011. It is the only piece of legislation in Sweden concerning World Heritages and gives authority to Laponiatjuottjudus, as the new management organis ation would be called. Two months later, on August 22nd, all participants of the Laponia Process were invited to attend the founding of the new management organisation.

Laponiatjuottjudus was founded in Stuor Muorkke and Michael Teilus was elected as the first chairperson of the organization. This marked a happy ending for the Laponia Process, which thereby could hand over its work. In December of 2012 the formal decision was made by the County Administrative Board of Norrbotten to grant the management of the World Heritage to Laponiatjuottjudus, which at present is the manager of the Laponian World Heritage.

The current chairperson of Laponiatjuottjudus is Jakob Nygård. The organisation has a Sámi majority on the committee but all decisions are reached by consensus. 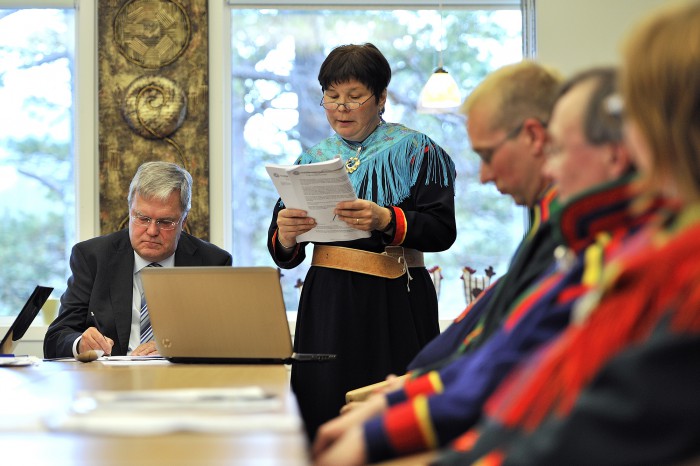 The time was right for the Laponia Process. It clearly fitted in with processes happening worldwide. I don’t think it would have been possible to carry it out five years previously.

Jan Olov Westerberg, former Director of Environment at the County Administrative Board