Change language
Seasons
You are here: Hem / Life in Laponia / The land / Traces in the landscape
Listen here

A vast home for all times.

Traces in the landscape

There are more than 3,000 known ancient and cultural remains in Laponia. The oldest are almost 10,000 years old. More than half the ancient remains are hearths, fireplaces – that is to say, traces of goahte tents and settlements.

If you start to take a closer look around you in the landscape you will find traces of people who have been here before us:

A ring of stones is probably a hearth. It has been home to people for a short while. They are almost always close to streams, whose water was used in cooking, and on dry hills and ridges. Sometimes nature is reclaiming it and you only see the stones appearing through twigs and grass. 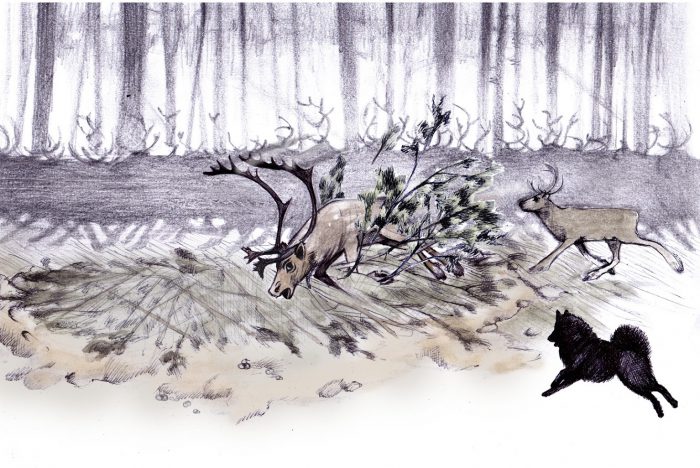 If you see a number of slightly larger pits in a row on the ground it can be an ancient trapping system. Trapping pits are strategically placed where reindeer or moose passed.

A pine with good bark

Many of the older pines bear traces of bark stripping. Rectangular marks along the trunk are a sign that the bark has been stripped and used in food. There are many bark stripping sites in the Laponia forests, above all near old trails and dwelling sites where people have always moved about. Bark was mostly taken in early summer when the sap is rising in the trees. The inner bark is then of the best quality and is easiest to take. In the Lule Sámi dialect, June is in fact called Biehtsemánno – pine month.

You can find enclosed reindeer pastures in the mountains. They also found in the forests but there they are more difficult to detect. A reindeer pasture is a place where the vegetation differs from the surroundings due to reindeer foraging and trampling. If you see a verdant patch in the middle of a swathe of osiers, it is probably a reindeer pasture.

In summer and autumn, the animals were rounded up daily in pastures where the cows were milked. Every family group kept a small herd which they constantly followed year round. Today the reindeer pastures are becoming overgrown since reindeer herding is no longer carried on in that way.

A cultural landscape
If there were no reindeer foraging, neither would certain plants exist here.

The name says it

Most places have a descriptive or explanatory name. For example:

Gárddevárre – the mountain with the reindeer enclosure
Buokkek – the place where there is a buogge, a storage rack
Dárravágge – the valley where there are steep drops or ravines
Gárranistjåhkkå – Raven Summit

Have you ever happened to sit on a large stone and found bones in a crevice where you were sitting? Then you found a bone cache. A bone cache is a place where people lay or have laid bones. These hiding places are often close to hearths and settlements. They are often reindeer bones that have been cut down the centre for the marrow and are hidden in crevices or under stones. To dispose of bones carefully was a question of showing respect to the living being and taking care of everything the animal had given. Reindeer bones are normally not burnt or thrown in a bin.

It was not unusual for special mountains and conspicuous places to be sacred. Both at Skierffe and Nammásj at the gateway to Sarek there are several sites where people and the gods met. East of Nammásj, for example, lies Lake Sájvva. It is said that Sájvva is abundant in fish – but only if you show respect and avoid making a noise.