A meeting point down the ages

People have lived in the area around naturum Visitor Centre for as long as we can remember. The big valley is like an artery for people and animals. Old hearths, dwelling sites and other traces in the landscape show that people have been on the move here ever since the most recent ice age.

In Stuor Muorkke, the centuries old forest, the steep high mountain, the large rivers, and a dazzling string of lakes all come together. This is where travellers had to portage their boats past the big waterfall, Stuormuorkkegårttje. The place was later also given its Swedish name, Stora Sjöfallet.

Naturum Visitor Centre is on the north side of Lake Láŋas, on the land used by Unna Tjerusj Sámi community. The south side of the lake is that of the Sámi community Sirges. The area around the mountains Gierkav and Juobmotjåhkkå are good foraging land where the reindeer find food early in spring. Parallel with the big valley, there are many migratory trails which are used every year when the reindeer are moved up to summer foraging areas west of Stuor Muorkke.

“Before, it was the south side of the lake that was the heart of Stuor Muorkke. That was where you went by boat. My father made a living from fishing here, alongside selling craft products to tourists. In those days, before the road was built, there was hustle and bustle on the lakes. It was Sámi people, tourists and hydroelectric construction workers. Our family migrated a lot, because of the fishing. But then the road was built and that became the route to take. Then we also moved to the side where the road was. We were flexible, as long as we had the fishing.

I think this place was a junction, because the lake system was our highway and the different valleys meet here. There are so many traces and remains. I’m among those who walk in the forest a lot. I have found lots of things around here.

There was a lot of hunting here in the valley, and there was the waterfall of course. But above all Giergav. It’s quite magical, that mountain. When we were small, mother always said that Stállo lived there. If we didn’t behave, Stállo might come. 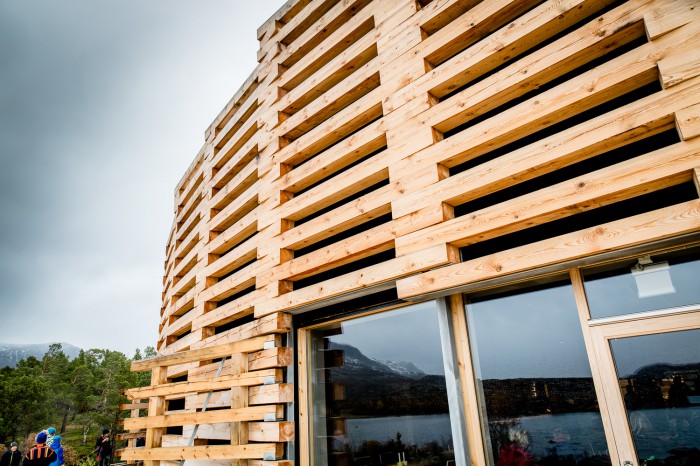 West of naturum Visitor Centre runs the river Viedásädno. The name Stuor Muorkke, which in Swedish is Stora Sjöfallet, has become a generic name for the area. Directly south, the three Gierkav mountains tower. The fell is like a cradle for the reindeer, because the bare ground appears early and there is always good foraging there.