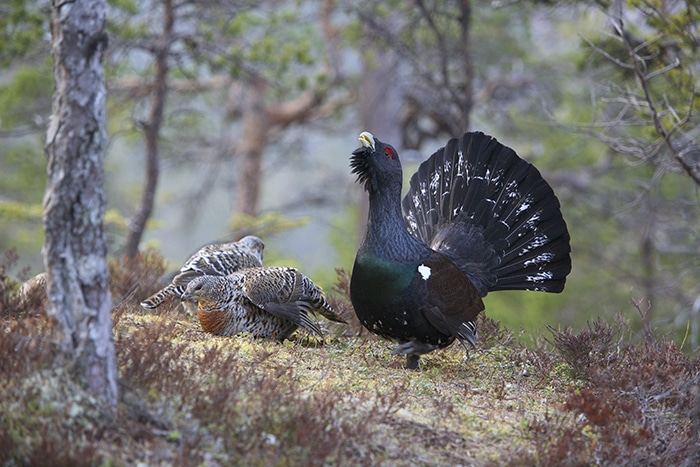 More about the capercaillie

The capercaillie and black grouse can occasionally produce hybrids, called Rackelwild. Even when small, the chicks can travel up to a kilometre in a day.

The capercaillie is Sweden’s largest grouse species and characteristically a non-migratory bird. It lives in the Laponia forests all year. The so-called lek, the capercaillie courtship dance, goes on from March to May. The chicks need a lot of protection when newly hatched, and follow the female for 2 to 3 months before setting off on their own adventures.

The capercaillie thrives in really old-growth coniferous forest, preferably pine, with elements of deciduous forest and stretches of wetland. It likes to nibble on pine needles and in autumn also aspen leaves. The female eats Hare’s-Tail Cottongrass and Bilberry sprigs before laying eggs. When small, the chicks eat first insects and then parts of plants.

For the capercaillie to be really content, the forest should be more than a hundred years old. The capercaillie has therefore diminished in numbers, forced out by forestry. Except for the island of Gotland, it occurs sparsely in the whole of Sweden up to the areas of mountain birch. It can occur generally in protected old-growth forest in nature reserves and national parks. It is common in Muttos National Park in Laponia.