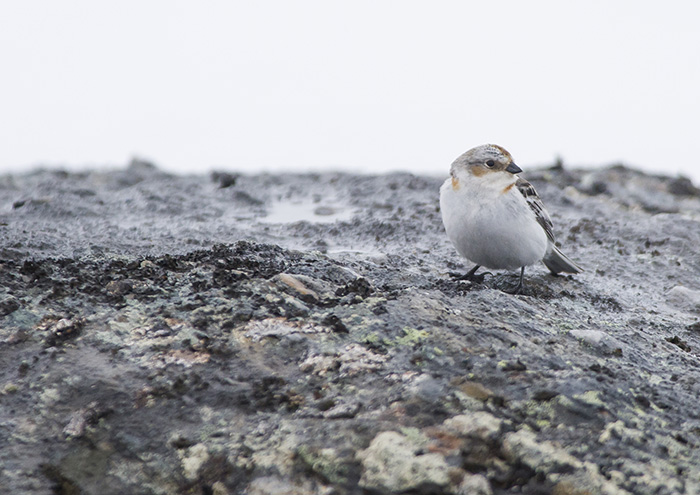 More about the Snow Bunting

In spring, migrating Snow Bunting can appear almost anywhere in the whole of Sweden. When they have arrived at mountain settlements, before moving onto higher ground, people used to catch them and eat them as a delicacy. On the Holmöarna Islands in the Kvarken area of the Bothnian Sea, people also caught large numbers of migrating Snow Bunting in the spring. It was often a welcome addition to the meagre diet at this time of year.

In large parts of its area of distribution, the Snow Bunting  nests on the tundra, but in Scandinavia it is associated with Alpine areas. The large numbers of Snow Bunting  you see in the spring along the Gulf of Bosnia and the coasts of the Bothnian Sea probably come above all from Russia to the east. It is probably these eastern birds that appear regularly, but nowadays in fewer numbers, along the coast of southern Sweden.

The Snow Bunting  nests highest in the mountains of all bird species. In some cases the common gull can challenge the record, and also nests on small, very elevated lakes. At levels above 900 m above sea level, the Snow Bunting  is a fairly common bird in Laponia. You see it above all näära near areas with large boulders and places with meltwater streams. There is a greater abundance of insects there, and that is where the Snow Bunting  finds food for its young. It feeds the young with small insects which it often picks from snowdrifts where the insect have happened to fasten. In nesting period is it will also eats seeds from year old crowberries.

The Snow Bunting  can nest in the most barren environments in the entire polar region – even on mountain summits on the inland ice in Greenland. As regards nesting in northern latitudes, it is probably only the Raven that can challenge the Snow Bunting .

The Snow Bunting  winters on southerly coasts around the Baltic Sea, and Norwegian coasts, and can be considered almost a seashore species in the winter months. It then lives on for example grass seeds which it finds on waterside meadows around the southern Baltic Sea and North Sea.