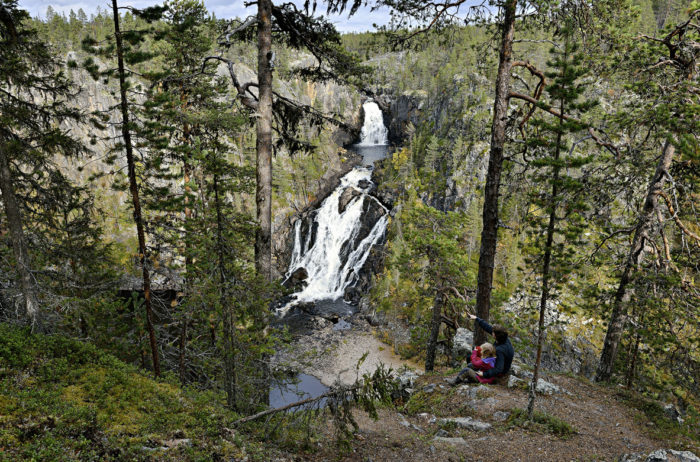 Ever since the last great ice melt, people have lived and moved about here. However, there are few and sparse traces of them. There are hearths and systems of trapping pits, and the ancient pines bear signs of being barked. Those who lived here were hunter gatherers. The most important game was wild reindeer. In Muddus/Muttos there are two systems of trapping pits. They lie strategically placed at sites where herds passed on their migration. When winter had the land in its grip, camps were built near the places where the wild reindeer foraged.Today’s reindeer migrate along the same routes as the wild reindeer once did.

The land in Muttos is used by Gällivare Forest Sámi Community, and Sirges and Unna Tjerusj Sámi communities. For thousands of years, people have lived here without leaving traces. A short way upstream on Muddusagahtjaldak (the Muddus Waterfall) a trail passes that is used by Sirges Sámi Community when moving the herds between the winter area in east Muttos and the summer area in west Laponia.

From the waterfall you can continue your hike to the north, east, or south to the entrance at Skájdde.